When engineering teams design and race solar cars, they need to make the most of every joule. That is why the Punch Powertrain Solar Team (Solar Team) uses simulation-led design to ensure its car optimizes energy capture and utilization.

One innovation that blew the competition away was the car’s ability to capture wind energy like a landsail. This, and other improvements to the Solar Team’s car, was the result of more than 500 simulations over a span of five months.

The Solar Team’s hard work and landsail innovation paid off. They finished:

“All the teams came to see how the landsail system was integrated,” said Adrian Baiets, former SolarTeam member. “The World Solar Challenge was so impressed, we won the Commonwealth Scientific and Industrial Research Organization (CSIRO) Technical Innovation Award. I wouldn’t be surprised to see other teams designing a similar mechanism into cars for years to come.”

As other teams play catch-up, the Punch Powertrain Solar Team, now under the name of the Agoria Solar team, will utilize ANSYS simulation software thanks to a sponsorship and technical support from CadCorner, an ANSYS Channel Partner.

Turning a solar car into a landsail hybrid didn’t happen overnight. It took careful planning — after the initial Eureka moment.

“The first idea was to give the solar car 4-wheel steering,” said Baiets. “This way the wheel fairings can be narrower, resulting in a better aerodynamic flow.”

A certain region on the World Solar Challenge’s Australian track is known for its crosswinds. The Solar Team realized that this wind represented an opportunity to capture extra energy.

Simulation showing how a crosswind creates a landsail effect on the solar car.

“We already had 4-wheel steering,” said Baiets, “so why not put all the wheels in one direction and the body of the car on an angle so the nose doesn’t point forward? The car can now point the nose to a maximum yaw angle of 3 degrees. This angle gives the car a landsail effect and a better aerodynamic performance.”

This small yaw angle required a lot of extra work. Typically, the car is simulated and designed for a front wind. But this yaw angle meant that the Solar Team needed to perform a different set of simulations that included the cross wind. To perform this, and other aerodynamic simulations, the team automated the workflow in ANSYS Fluent.

Even though each World Solar Challenge is two years apart, when taking into consideration the time to test, fabricate and tweak the car, the simulation team has about five to six months to develop a car’s design.

That isn’t a lot of time to come up with a concept, optimize it and ensure it aligns with all the regulations of the contest. As a result, the Solar Team had to be very efficient with its simulations. 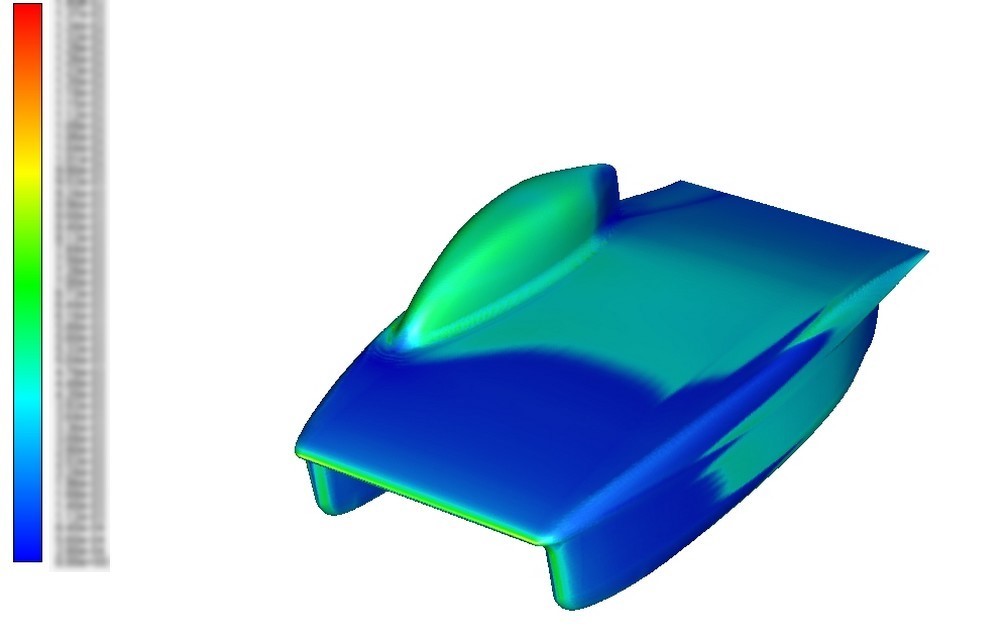 Simulation shows the turbulence along the car’s skin (top view).

“It was an iterative approach,” said Emmerick Vandervelpen, a member of the Solar Team who is working on the car’s aerodynamic design. “We had a base design and tried to optimize each part one by one. By this approach, we fell in love with simulations. We had to be efficient with our time and run as many simulations as possible to map out the features of the car and how they affected drag.

“I drew up a workflow where I was able to run simulations all the time,” added Vandervelpen. “Using the journal function in Fluent, I could set up the simulations and let them run overnight. The system would load the new simulations automatically. I would then assess the results in the morning and queue up the next set of simulations.”

The Solar Team’s workflow was so efficient that the team was able to run over 500 simulations in a 5-month period.

Thanks to the data collected from these simulations, the Solar Team was able to reduce the drag on its car by 20 percent compared to the previous model.

“Without simulation, it’s difficult to know the effect of your changes,” said Vandervelpen. “Making the simulations took time, but after a day you can map the effects of one change on the aerodynamics. So, each day we were one step closer to the best car design.”

To learn how to use simulation to optimize a car’s aerodynamics, read the white paper: Scaling New Heights in Aerodynamics Optimization: The 50:50:50 Method. To try out ANSYS Fluent, sign up for an ANSYS Student Team sponsorship.